SEO strategy development for WUNDERWEIB.de and prompt increase of Google traffic by 13%

WUNDERWEIB is one of the umbrella brands of the Bauer Media Group which has been bundling the content of 30 magazines online since 2009. WUNDERWEIB offers great depth of content which, however, could not be adequately mapped in the Google index. So the goal was to achieve a significant increase in visibility at Google starting from mid-2012 on.

The mgm online marketing team was charged to develop a long-term SEO strategy based on strategic analysis and to design a concise package of measures to be implemented by an in-house team. The implementation of this framework by the BAUER team resulted in a clear increase of visibility after only a month. 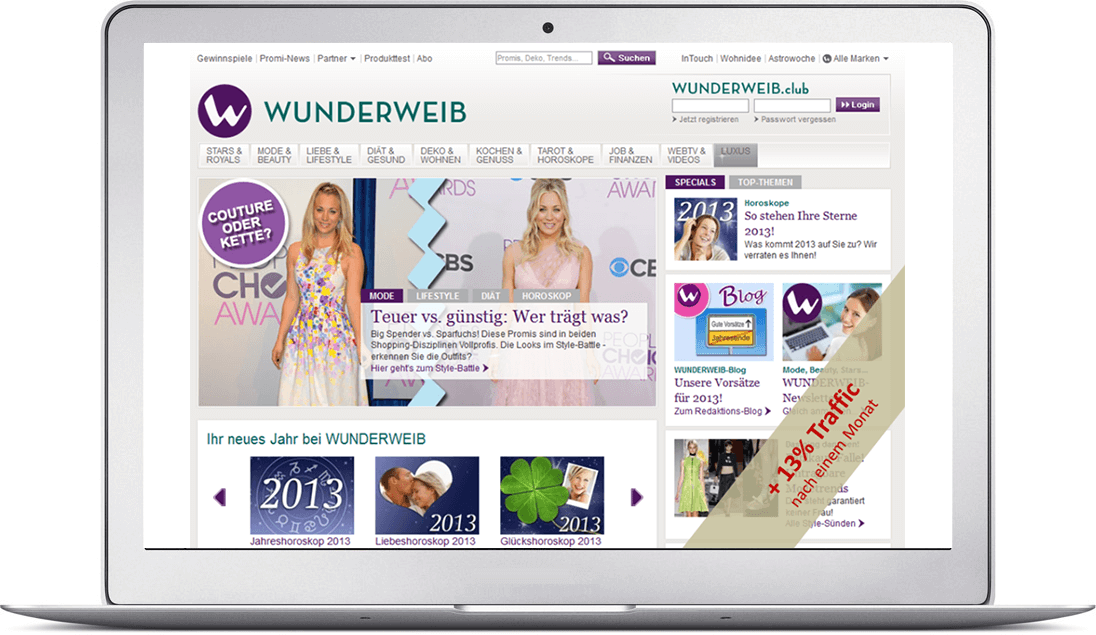 Crux I: “How visible are we with our issues?”

The target group of WUNDERWEIB consists of women who gravitate towards the issues fashion and beauty, health, family, recipes, interior decoration, celebrities and horoscopes. To ensure that articles are read by as many customers as possible, they have to display “high up“ on the results list of (Google) searches. In mid-2012 certain WUNDERWEIB articles were still not featured prominently enough in the Google index. For example, WUNDERWEIB content for search terms like „hollywoodstar“ was listed only at Google position 54 on the 20/8/2012, even though respective content was available.

Crux II: “The index is alive!”

SEO knowledge has only a very short shelf-life. Every year Google carries out approximately 500 algorithm updates. Additionally, there are weekly video messages, e.g. by Matt Cutts, head of Google’s web spam team. So SEO strategies and corresponding operative measures (e.g. author rank, user intent signals) have to be updated all the time. For this the identified changes to the Google algorithm have been checked with respect to the impact they have on the visibility of the particular content.

Consequently, the customer does not want short-term SEO optimization but long-term competence for his in-house team to optimally place WUNDERWEIB content according to their visibility goals.

“Classic SEO as used 2 to 3 years ago is virtually no longer relevant today. Short-term tricks do more harm than good. Instead of this, we need an integrated strategy to make unique content searchable for search engines”, stresses Christian Fricke, CEO of BAUER DIGITAL.

The first step was to facilitate knowledge transfer of content specially geared towards the departments editing, technology and website administration. It conveyed for example the current usage of nofollow metatags (http://www.youtube.com/watch?v=4SAPUx4Beh8) and adviced that page rank sculpting through the frequent use of nofollow links leads to a reduction of link juice and in the long run does more harm than good.

In a second step, task packages for the BAUER team were defined from the identified optimization measures to translate the lessons learned immediately. For example, the so-called “302 Error Pages” had to be corrected at short notice, as these temporary re-directs have the effect that the Google bot does no longer redirect any link juice. To achieve this, first a prioritized list of which redirects have to be corrected was created for the team. Similar lists were delivered for orphaned URLs, toxic back links, pages with too long meta descriptions, pages with more than 250 out-going links and other subject areas.

„SEO has nothing to do with voodoo but is based on knowledge how the index works: After the tasks had been clarified, the team could already achieve their SEO success by themselves after the second week”, summarizes Dr. Ruth Betz, who was the responsible project manager in the mgm e-commerce team.

Already, shortly after the conclusion of the project, WUNDERWEIB could increase its visibility at Google and only a month later 13% more traffic was measured on the page. And since January 2013 WUNDERWEIB has been ranked in the first position for “hollywoodstar” as well.

* This reference has been officially confirmed by BAUER DIGITAL.

Bauer Digital KG dedicates itself to technological improvement as well as the development of content for existing Internet offerings like TVMovie.de and BRAVO.de, as well as the foundation of innovative online brands. The food portal LECKER.de and the women’s portal WUNDERWEIB.de stand for the successful umbrella brand strategy of the Bauer Media Group.

“We were not given SEO tricks, but well-founded search engine knowledge to do SEO ourselves. Our SEO strategy is now up-to-date and the traffic data of WUNDERWEIB.de increases.” 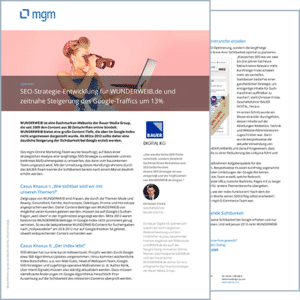