ELSTEROnline – Successful realization of the demands made on e-government portals

Demands made on e-government portals

In a number of different ways the ELSTER project has played a pioneering role in the provision of public sector transaction portals. This is due to the fact that the demands made on such public portals with regard to legally binding dialogues between citizens and / or companies and government organizations exceed the demands made on commercial portals in many ways. Key aspects include: 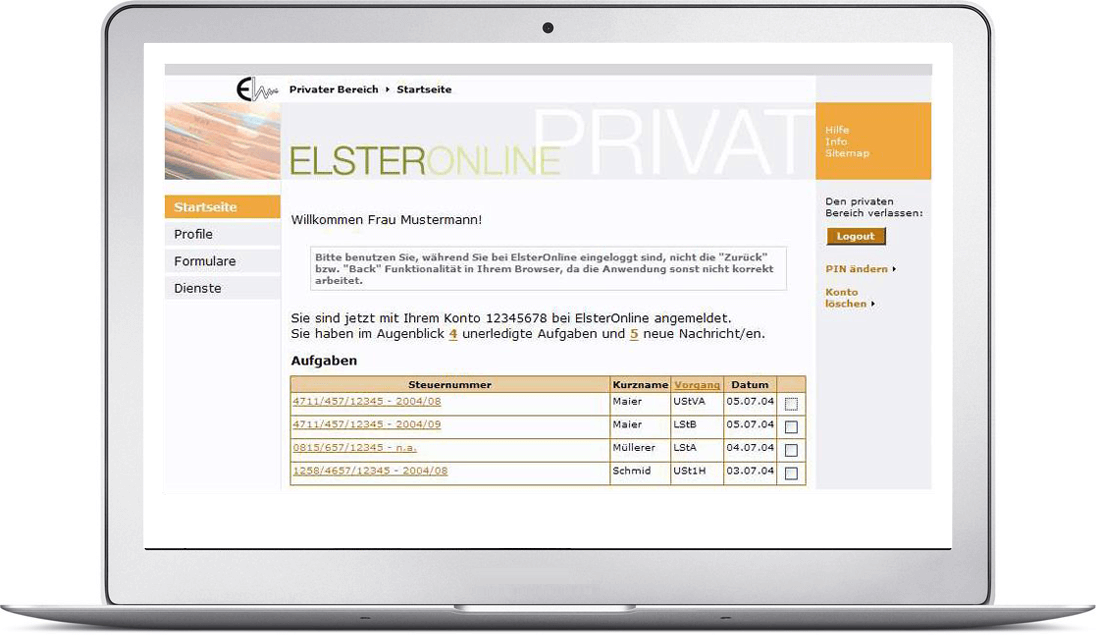 “In the implementation of ELSTER we opted for a lean project approach with controllable implementation steps. In small teams our experts for fiscal and taxation matters cooperate directly with the technical experts,” as Roland Krebs, ELSTER project manager at BLfSt outlines the project’s success factors. “In this way, demands and requirements are understood correctly right from the very outset. Consequently, we are able to realize the demanded functionalities in every release and on time.“

Within the context of the ELSTER project, mgm technology partners are responsible for the design, the implementation and the technical quality assurance of the portal. In three annual releases the ELSTEROnline services and the basic tax related procedures are expanded step by step.

Given the legislative requirements of the Federal Ministry of Finance (BMF) special demands are made on the technical quality realized. In each release changeover, for example, the historical traceability of data processing over a ten-year period must be guaranteed. Given the due submission dates mandated by law, the load carrying capacity of ELSTER in operational modes is highly relevant. Especially around target and cutoff dates, short response times and throughput capacities for very high user numbers must be guaranteed.

Performance and load stability in up to 15,000 parallel sessions

At its maximum capacity stage, the ELSTEROnline portal will be serving more than 30 million households and five million companies. This entails tremendous access and processing loads, especially around the due dates for filing tax returns. Consequently, load stability has been ensured since the first release by way of active performance engineering. Scalability, performance and stability of the portal software are subject to constant monitoring, while targeted tuning measures are also supported.

In addition to securing scalability and the verification of hardware sizing, it also makes it possible to detect platform errors at an early stage that would otherwise only occur under extreme secondary running conditions, or in cluster operations. A load test framework that mgm provided as freeware forms the foundation for these measurements. Thanks to its flexible instrumentation, all aspects of high load operations with a J2EE-application can be tested and measured. During the course of what is typically a several hour test running session with up to 1,000 parallel test clients, hundreds of parameters are continuously measured on the server and measured data are aggregated and evaluated. The option of automated integration of function testing test classes, also for the load test, without incurring further development input, reduces the necessary input in performing load testing. It is only necessary to provide specific technical test classes once and changes in following releases require adjustments in one single location only.

Citizens are fully justified in demanding the prudent, cost efficient appropriation of public funds in large-scale projects. Within the context of the government’s e-government initiative, the ELSTER project delivers impressive proof of the inherent potentials in such approaches.The quality of the ELSTER project, providing citizens and companies with schedule services available 24/7, is based on two key success factors: a pragmatic, benefits oriented approach and the committed interaction of experts conversant with all the relevant fiscal and taxation related matters and know-how.

*This reference has been officially confirmed by the Bayerisches Landesamt für Steuern. 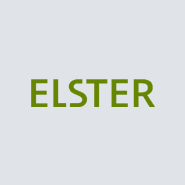 ELSTER (a German language acronym for Electronic Tax Return, ELektronische STeuerERklärung) is a joint project involving the tax administration authorities of the 16 Federal States and the Federal Ministry of Finance enabling the secure electronic transmission of tax data. The Tax Authority of the Federal State of Bavaria (Bayerisches Landesamt für Steuern, BLfSt) is acting as project manager.
In this context, the ElsterOnline portal was designed and implemented. As an Internet-based services portal, it covers the specialized, tax-related procedures and services supported by the ELSTER project. Since September 2005, taxpayers (companies, tax consultants and private households), in addition to the ELSTER form in use to date, can fill out browser supported online forms and transmit them to the tax administration authorities.

“In the implementation of ELSTER we opted for a lean project approach with controllable implementation steps. In small teams our experts for fiscal and taxation matters cooperate directly with the technical experts.“ 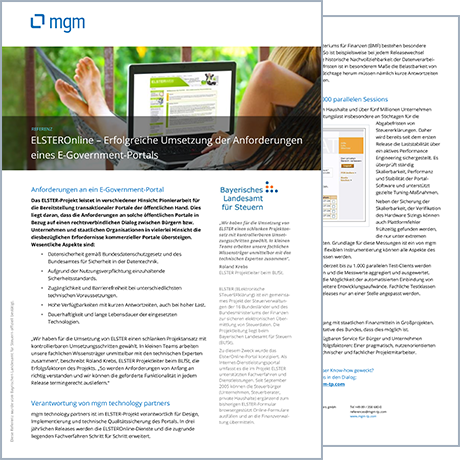