BG ETEM: Introduction of the procedure CUSA MuB in the C5 technology

The Berufsgenossenschaft Energie Textil Elektro Medienerzeugnisse is the statutory accident insurance for about 3.8 million people in approximately 200 000 member companies. It supports its member companies in the topics occupational safety and health protection. At the same time, the BG ETEM takes care of an optimal reintegration of injured and ill people.

In October 2013 mgm technology partners was commissioned to introduce CUSA MuB in the C5 technology in the areas members and contributions at the BG ETEM. Due to the previous fusion of the BG ETEM one had still been working in two different applications up to this point. Therefore the introduction required an extensive data migration. Thanks to their data migration competence – already used successfully in previous data migration projects like e.g. for the Kommunale Unfallversicherung Bayern and the Berufsgenossenschaft Handel und Warendistribution (BGHW) –and the selection of suitable tools, the experts of mgm technology partners, in cooperation with the customer team, succeeded to provide the data in the new system fast and reliable. 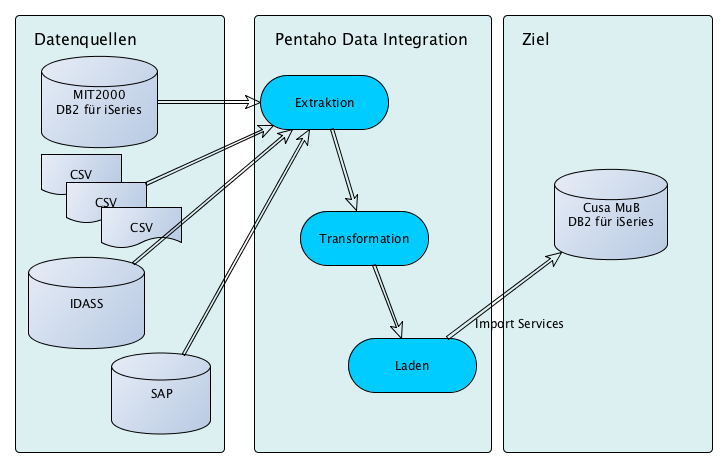 Building up a new IT architecture

Before the introduction of the CUSA MuB, the third party systems were supplied with data via daily batch jobs. These interfaces were mainly based on technologies no longer up to date. Therefore it was decided to build up a new architecture with which the third-party systems should be supplied with data in the future. mgm supported BG ETEM’s IT architects with the design of this new architecture: For that, the ESB already established at the BG ETEM was used in connection with an enterprise service layer. In doing so, the BG ETEM could also rely on the proven support by the colleagues of the Software AG.

The challenge of the BG ETEM data migration project consisted not only in technically migrating data from several, differently structured data sources. But also in recognizing, by the business analysis of the existing data and the new CUSA MuB business processes, how the data had to be prepared for migration. The mgm team, in coordination with the responsible departments, performed the data analysis of the existing data (data quality checks, analysis of existing business processes, of membership and contribution data) to successfully migrate the data for the new application.
First, the data (43 million membership and contribution data sets) were extracted from various data sources (DB2 for iSeries (AS/400), SAP, CSV files) and processed and then migrated with Import services (C5 services delivered by the CUSA MuB application’s producer for the migration).
The extraction, transformation and loading of the data were designed by mgm and implemented with the ETL tool Pentaho Data Integration (Kettle). The Import services were implemented by the mgm team in Java as Pentaho data integration plugins.
In order to perform a reverse engineering of both the Import services and the new CUSA MuB application „analysis“ in the project’s development phase, the mgm team implemented a solution for a H2 data bank and transformations with the Pentaho data integration.

In the project’s first year, one calculated with four releases of CUSA MuB version 2 and in the project’s second year with four releases of the BG ETEM-specific changes within version 3. In the face of the frequency of releases, the project duration and the number of employees available, the subproject management opted for a mainly manual test approach.
For testing, test concepts for the BG ETEM-specific functionalities were developed in CUSA MuB and test cases were described. These were performed by the testers of the BG ETEM’s specialist department. The manual tests were complemented by automated tests of the core functionalities. For that CitraTest, already in use at the BG, was employed.

User training for a smooth start

To guarantee a start with the new CUSA system as smooth as possible and a high degree of acceptance among end users, 150 users were trained on it. Guided by mgm, two employees of the department membership and contributions developed a training concept and training material for three different user groups. The trainings took place parallely at three sites (Cologne,  Wiesbaden, Augsburg) between September and December of 2015.
The time between end of the training and production launch – four months in the longest case – was considered as critical right from the start. To bridge this transitional time and to keep the lessons learned present, a training environment and detailled documents were provided.

Since the specialist department would have to perform special analyses also after CUSA MuB’s introduction, mgm created 14 finished reports in SQL format as well as 97 SQL views, with which an individual data evaluation can be done easily and without detailed knowledge of the database scheme.

Successful cooperation in the project team

During the project period, a great team, crisis-proof also under immense time pressure, grew together with the customer’s employees. „The fabuluous cooperation during the go live phase in which ‚working hand in hand’ was also possible with good results for 24 hours in a row, showed how well the team stood together“, Ulrike Fuchs, overall project manager at mgm, explains.
In meeting the dealine set by the BG ETEM management board, the project could be concluded successfully at a 100%!

* This reference has been officially confirmed by the BG ETEM.

The Berufsgenossenschaft Energie Textil Elektro Medienerzeugnisse is the statutory accident insurance for about 3.8 million people in approximately 200 000 member companies. It supports its member companies in the topics occupational safety and health protection as well as with the reintegration of injured and ill people.

“Without mgm’s support we could not have met the deadline.”

“We had a real partner on board with mgm.” 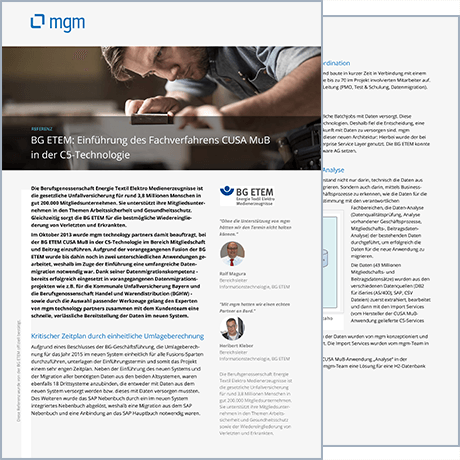