www.Station24.de: Platform for professionals on care topics in health service

In order to secure its market position on the Internet as well, Bibliomed decided to create the station24.de portal, providing an extensive range of services revolving around care and health topics. The open source Liferay portal was opted for as technology basis. In assigning mgm technology partners, Bibliomed chose a project partner that could already point to years of experience in the introduction of online business concepts, also based on Liferay. The station24.de platform went live as planned in September 2010. 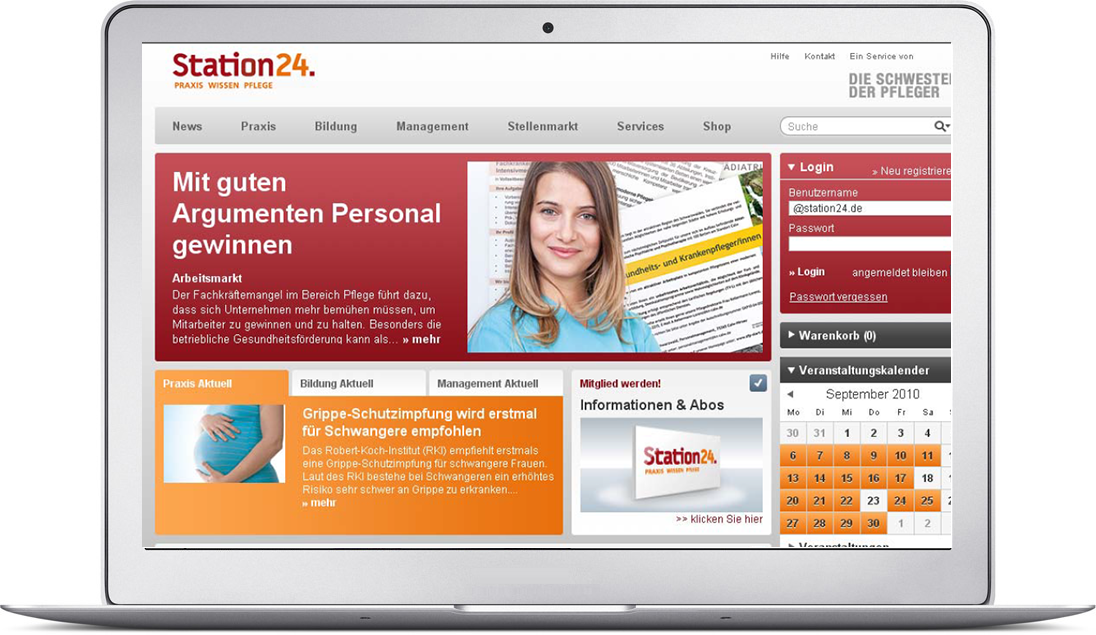 At the outset: “How are we to accomplish all this in only six months?“

Our initial gratification on Bibliomed’s decision for mgm was somewhat short lived, however. In view of the tight project duration and the specified budget, our team – consisting of a project manager, a Liferay architect and three technical engineers – had to get off to a very rapid start. When assessing the detail specifications it already became clear to us that the multitude of functions would call for special efforts:

A building block system of various templates was created directly in Liferay in order to present the editorial content and specialist articles. Thanks to the presentation logic developed, it is possible to add teasers to contents in the desired context and format in Station24. The operation is so simple that the Bibliomed editors were able to use the system independently after only half a day of training.

In technical terms, the presentation information on the interface of a teaser (such as structure, size, format etc.) is directly shown in a Liferay portlet. When a new teaser is to be activated, all that the editors have to do is read in the content via the API of the CMS.

Planning security guaranteed in the project with mgm technology partners

“We consistently geared the development of Station24 to customer wishes, instead of a technology orientation“, as Armen Markarian, project manager at mgm explained.

In the course of project work the customer requirements were rapidly visualized by prototypes that were also used as basis for discussions in the daily coordination with engineers. In this way the entire team (also at Bibliomed) acquired a feeling at an early stage for the subsequent user experience both from the end customer and editorial viewpoint. In the realization of the platform targeted investments were made where it was possible to generate additional value, such as the teaser concept developed. Otherwise, the use of Liferay standards (such as personalization, shop etc.) helped to reduce development input and costs.

“We are very pleased with our joint project success. In mgm technology partners we have found a fast track, high performance service provider and we hope that we will continue to join forces in further developing our online business over the long term. We have laid the foundation with the first project phase that was concluded precisely on time and within the specified budget“, as Martin Elting, Technical project manager at Bibliomed, enthusiastically commented on the positive cooperation with the mgm team to date.

* This reference has been officially confirmed by Bibliomed.

Bibliomed Verlag, the publishing house subsidiary of B. Braun Melsungen AG, is a leading specialist publisher active in the areas of medicine, care and the health services sector. Bibliomed Verlag fields a portfolio of eight specialized magazines (“Die Schwester Der Pfleger“, the first magazine launched, has been on the market since 1962, while “Die GesundheitsWirtschaft“ is the most recent addition).
The magazines reach around 350,000 professionals, including physicians, care personnel and hospital managers as well as readers from the political, industrial and scientific arenas. Bibliomed has successfully organized the largest specialist conferences for clinic management and care in Germany.

“With mgm we found a racing team with which we can advance our online business long-term.” 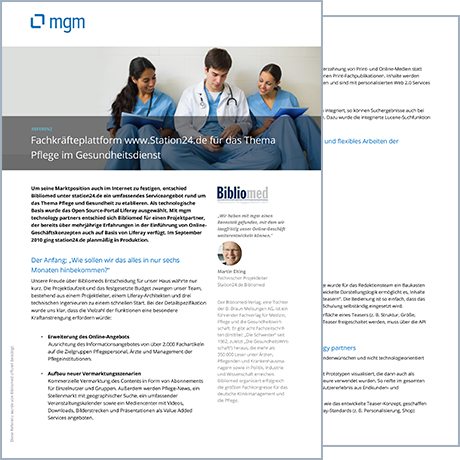