Integration of the IT landscape as part of the merger of TEAG and GVT into E.ON Thüringer Energie AG

The entrepreneurial chances of a merger between energy suppliers are high: Besides the more opportune purchasing conditions as well as the implementation of operative synergetic potentials, the company can offer the customers electricity and gas from one source.

To be able to quickly and effectively utilize these potentials, a fast and consequent integration and harmonization of the underlying processes are necessary. Since fundamental business processes in each of the company segments are respectively automated through their own IT system, the planned advantages can only be completely realized with a consolidated and integrated process and IT system landscape.

The operative connection of the company segments is complex; the integration / consolidation, the daily business as well as the running operations must be taken into parallel consideration. During the process, the workload and strain of those employees, who are often closely tied to their companies through long years of affiliation, increase strongly. In this area, the CIO-segment must assure trouble-free daily business, simultaneously carry out the integration and consolidation, implement user-oriented modifications and in conclusion transfer the results back into the routine operation. 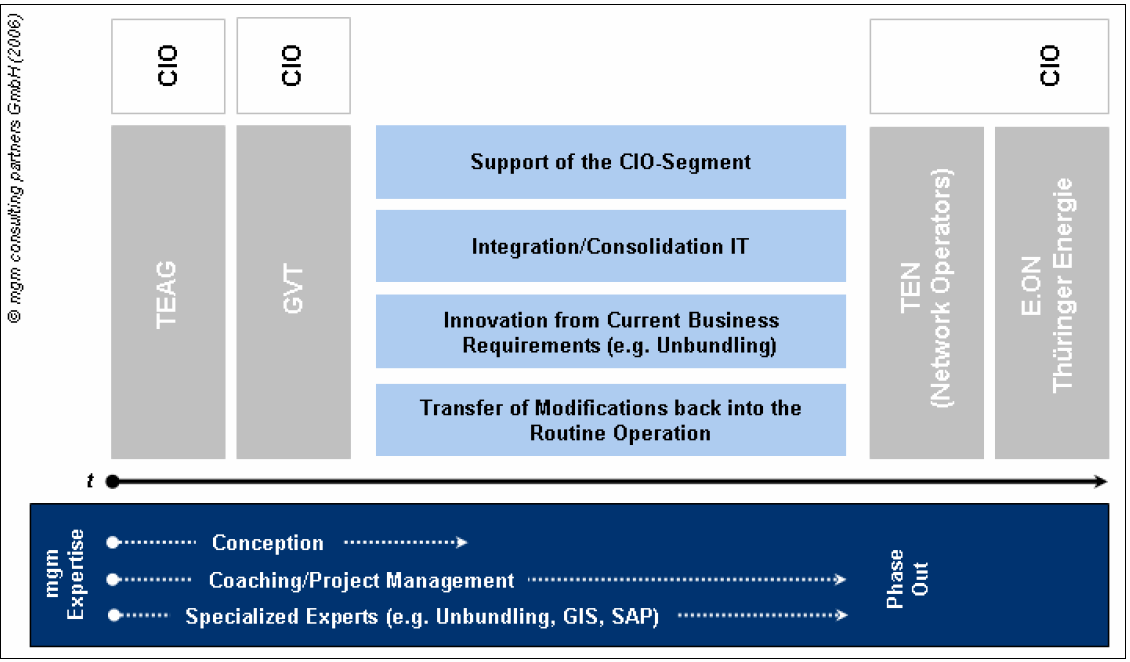 The Expertise of mgm consulting partners

In cooperation with the CIO segment, mgm consulting partners planned, steered and supported the merger’s IT integration and consolidation projects through coaching, concept development and project coordination.
“With mgm consulting partners, it quickly turned out that we had found a partner, who is very well versed with the consolidation of heterogeneous IT-landscapes”, Mr. Lothar Möller, CIO at E.ON Thüringer Energie, recalls.
After an analysis of the system landscape and definition of the target architecture, ten IT projects were initiated. In cooperationm with the special departments and responsible IT service providers, mgm’s project managers accompanied the development of specialized processes as well as the system specifications resulting thereof.

The right manning for project tasks through knowledgeable insiders, originally from both company segments, proved itself as the primary factor of success. At the same time, the coordination and communication of subtasks promoted the necessary development of a mutual project understanding within the team as well as the required team feeling despite the, in part, very high time pressure.

Core Projects of the IT Merger

In weekly project manager meetings, a continuously up-to-date project understanding of all those involved was cultivated and a permanent comparison of the interweaving projects achieved.

In 2007, E.ON Thüringer Energie will have a homogeneous operational landscape at their command, which is equivalent to the  current requirements of the Federal Network Agency and also possesses a pilot character within the E.ON Corporation. In the future, the CIO segment, to be reorganized and expanded within the course of the project, shall attend to and further develop this operational landscape in cooperation with the specialized departments.
Mr. Jürgen Gnauck, Vice Executive Chairman of E.ON Thüringer Energie, retrospectively evaluates the cooperation positively: “The project’s objectives could be achieved by focusing on the project content in the cooperation with the mgm’ers and due to the good team formed with the E.ON Thüringer Energie staff.”

* This reference has been officially confirmed by E.ON.

As a subsidiary of the E.ON Group, the E.ON Thüringer Energie AG is the central electric and gas utility company in Thuringia. The company was established in 2005, through the merger of the electricity supplier TEAG with the gas supplier GVT, as a further consequential step of the E.ON Corporation in becoming a European complete supplier.

“With mgm consulting partners, it quickly turned out that we had found a partner, who is very well versed with the consolidation of heterogeneous IT landscapes.” 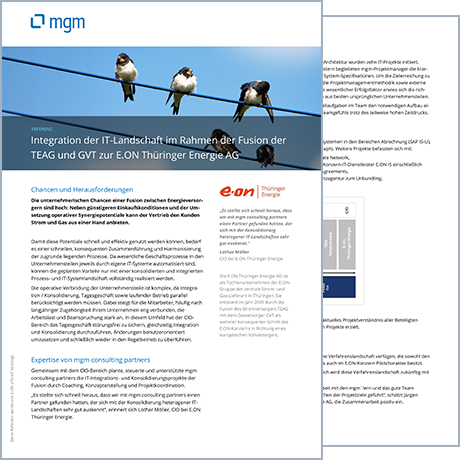