After years characterized by the increasing internationalization of the business as well as a number of company acquisitions, a uniform IT target architecture was defined. This entailed the replacement of a considerable number of legacy systems, or their migration into the planned system environment. mgm technology partners supported this data migration project in the conception, the migration preparation as well as the quality assurance phase. One of the key project objectives to be achieved consisted of the conception of a technical migration tool tailored to the needs of Swiss Re Germany, which was developed in close cooperation with the customer.

The project was prompted by the strategic decision of Swiss Re to support all future business based on a uniform system landscape, across the boundaries of individual country locations.

In this context, the following systems, among others, were impacted by the consolidation within a Central Business Application Architecture (BAA) at the German subsidiary:

The listed systems were either replaced in the course of the project or migrated to the target structure. In order to reduce complexity, five sub-projects were defined, for which a sixth Project Management Office (PMO) team then defined the necessary methodological and technical migration standards and implemented them in the individual teams.

As an expert for data and system integration, mgm supported the following matters and topics in connection with the PMO Group:

The mapping of individual attributes and values between source and target systems in the BAA represented a main activity in migration preparation in the individual five sub-projects. Here, the direct cooperation between specialist areas and technicians was called for. It was necessary, for example, to migrate data from different source systems to the central target system. In order to optimize the necessary work in the teams, an appropriate tool was developed for attribute and values mapping for this migration project.

“Thanks to the methodological competence of mgm, it was possible for us to efficiently deploy the expertise of our technicians, as well as the specialized know-how of our business experts,” explains Andreas Prott, project manager responsible for migration at Swiss Re.

After all of the teams were familiar with system operations and handling, mgm developed cross-project solution scenarios for data migration within the context of consistency management.

During the following integration test the smooth cooperation and lateral coordination between the individual sub-projects was of essential significance. 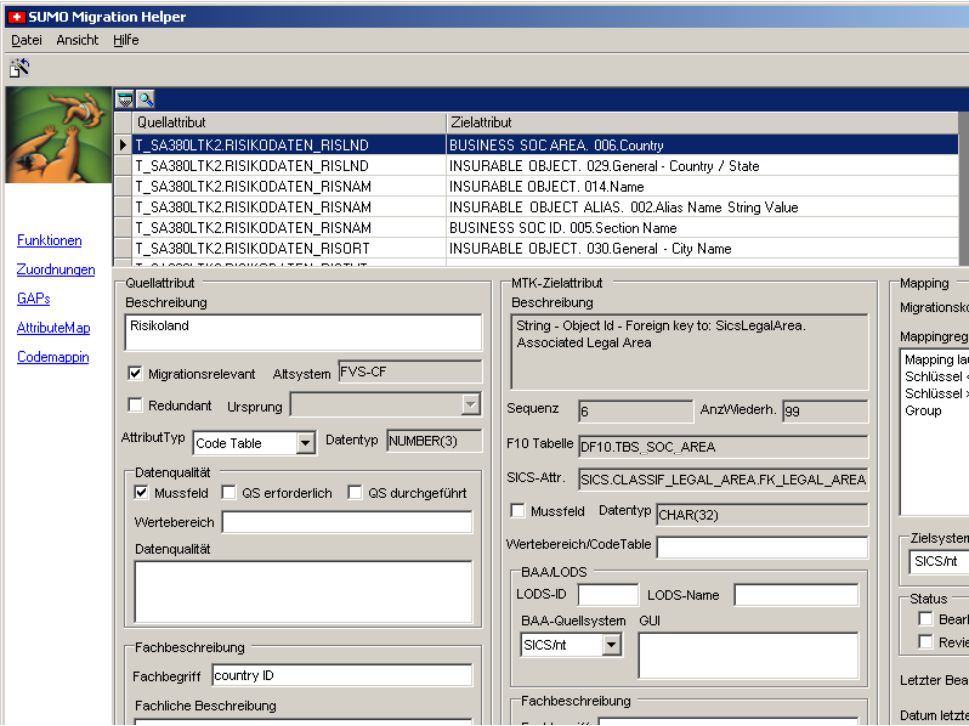 In spite of the high complexity due to backfeed as well as the number of core systems involved, the project was concluded within the specified time frame. Following an internal audit, the project was even awarded the company’s in-house best rating.

“We have experienced mgm technology partners as a reliable and highly competent project partner. In view of these strengths, we will also consider mgm as a proven partner for current and upcoming projects,” as Andreas Prott lauds the project work performed to date.

* This reference has been officially confirmed by Swiss Re.

Swiss Re is one of the world’s leading re-insurers, and is represented in more than 25 countries. The traditional reinsurance products, and the associated services in the non-life insurance and casualty business as well as life and health insurance are rounded off by insurance-based corporate finance products and solutions for comprehensive risk management.

Project manager responsible for migration at Swiss Re

“Thanks to the methodological competence of mgm, it was possible for us to efficiently deploy the expertise of our technicians as well as the specialized know-how of our business experts.” 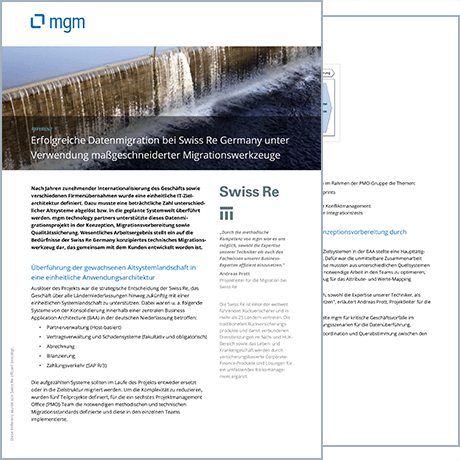 Reference Swiss Re as PDF